Posted by Sean Freeman on Oct 3

Battle Rap has lived in the heart of the underground since the beginning of its creation. Dated back to the 80s, the sport’s path to mainstream really began to take off in the early 2000s with movies like 8 Mile and segments like #FreeStyleFriday on 106 & Park. Today, the ever growing battle rap has emerged to the forefront of the hip-hop scene, thanks to rap leagues such as Ultimate Rap League, King of the Dot, and GrindTime.

A3C has a special night set up for Hip-Hop’s number one sport come October 4th. 4 battles, 8 performances, and a beat cypher all under one roof! The night will feature new comer battles between Alias and Born, Don’t Flop competitors Troy Brown and Luminous. Next will be a hot battle of the vets with Jersey’s LottaZay and Atlanta’s own Automatic Ray. The night’s main event will be a heavyweight bout between Bonnie Godiva and Ness Lee!

Bonnie, widely known for her witty wordplay and clever schemes, is always ready to duke it out with the. Always ready to duke it out with the top talent, the New Yorker recently got the best of Nick Cannon after trading verbal jabs on his show Wild ‘N Out. Ness Lee brings a different flavor to the table. His humorous punch lines are bound to have the crowd in tears and his opponent uneasy and woozy. The ATLien has ran through King of the Dot, Don’t Flop, and Grindtime, many of the premiere battle stages so we know he’s ready to rock the A3C stage this year!

The Battle Rap heavyweights will showcase their talents at The Music Room on Wed, Oct 4th from 8pm - 12:30. Free with A3C pass or $10 w/out. Add it to your schedule of events on the official A3C app! 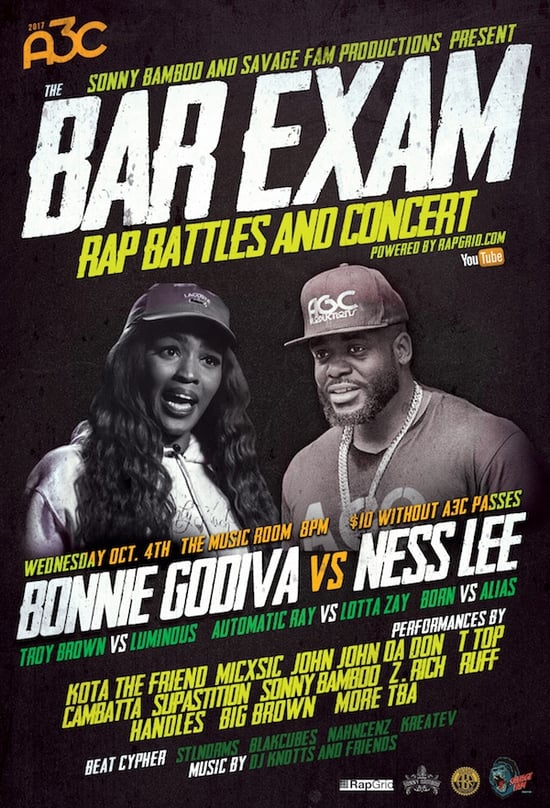