Posted by The Blog Team on Jul 23

A3C is proud to announce both Rob Stone, Founder & Co-CEO of Cornerstone and Co-Founder of The FADER, as well as Andy Cohn, Publisher and President of The FADER, will be featured speakers at the A3C Conference.

A3C will host an intimate conversation with Rob Stone to discuss his more than 20 years helping to give a voice to artists in hip-hop and beyond as a pioneer in the worlds of publishing and marketing. At the forefront of the hip-hop revolution in the early 90’s, Stone worked with legendary music mogul Clive Davis at Arista Records where he was integral in expanding the label while working closely with Sean “Puffy” Combs and developing the marketing plans for The Notorious B.I.G., Craig Mack, and others. Today, Stone co-leads Cornerstone and The FADER’s mission to seamlessly merge genres, champion underground artists, chronicle stories and break careers for today’s biggest stars while working for some of today’s most iconic brands including Coca-Cola, Google, YouTube, Apple, Spotify, Pernod Ricard, Major League Soccer, and The North Face. 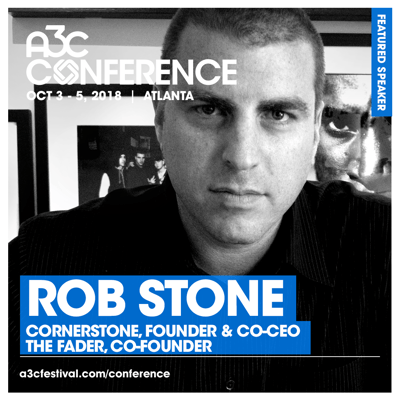 Andy Cohn joins the highly anticipated panel, Creative Agencies: The Art of Connecting Artists and Brands, which will feature individuals that have helped orchestrate some of the most compelling brand partnerships in hip-hop. Over the course of the past fifteen years, Cohn has built and led The FADER brand, skillfully developing and launching The FADER, Inc. as a multiplatform hub for curated music discovery and culturally connected content speaking to a combined audience of nearly five million young adults monthly. Along with Rob Stone, Cohn has played a crucial role in shaping The FADER’s legendary FADER FORT, one of today’s most anticipated live music events. From the cover of its influential magazine to the FADER FORT stage and beyond, The FADER has been instrumental in launching many artists careers, while offering unparalleled access to those artists, and bringing artists and brands together in authentic, symbiotic ways. 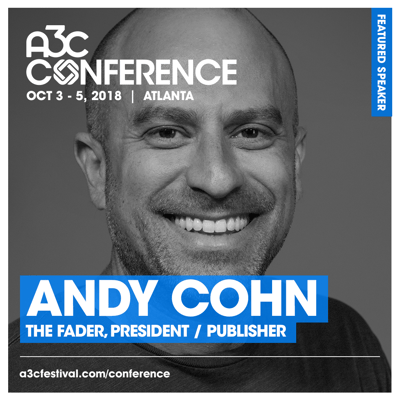 In Atlanta between October 3-5, 2018 the A3C Conference hosts hundreds of tastemakers, thought-leaders and industry experts that shape hip-hop music and culture.