Posted by Marcus Griffin on May 8

Last week, we introduced you guys to some stellar acts from around the country and this week we will continue to do the same. This week, we're back at it again with 6 new artists! Thanks to all who voted last week and we welcome you to participate again.

We want to provide a stage for the best hip-hop artists on the come up and we need your help!

We review hundreds of artists each week (submission info) and pick 6 of our favorite artists... but we want the final decision to up to the fans.  Come back each Monday and discover 6 dope underground hip-hop artists from across the world.

You can vote for your favorite artist every day. The two artists with the most votes will be invited to perform at #A3C17 in Atlanta and have a chance to perform on the A3C Festival main stage.  Voting ends on Friday at 11pm EST.

If you show your support for up-and-coming hip-hop artists and VOTE, we’ll send you a discount code for $10 off an A3C, Festival or Conference pass.

Get to know this week’s 6 New artists and vote for your favorite:

Born in Honolulu, but raised in Tampa, FL Gat$ is a formidable producer/rapper  who has opened for the likes of A$AP Ferg and Danny Brown and worked with artists such as Joe Cool, Shawn Chrystopher, and Fiend of Jet Life. A patented style of social commentary laced with everyday ignorance has lead to a cult following in Florida, and Gat$by is looking to take his talent and dark, yet invigorating music worldwide. Get to you know more about Gat$ and watch "VINTAGE".

Over the past several years, Ceddyjay has established himself in the NYC underground hip-hop scene. Known for his wildly raw and explosive live performances as a rap/rock artist with a youthful energy unmatched by anyone currently on the scene, Ceddyjay always blows his audiences away! Get to know more about Ceddjay and watch "6 Ring Flow".

Nedlog Era is a five man Hip-Hop collective out of Stone Mountain, GA bringing unique flows coupled with dark, eerie, and hard hitting production from the artist themselves, Nedlog Era brings versatility and great lyrics to the Atlanta Hip Hop Scene. Get to know more about Nedlog Era and watch "Mostime".

23 year-old Houston hip-hop artist JamesCurtis passion for music comes from the adversities he and his family had to overcome. Not only is he an artist,but he's also a . At a young age, James played the trombone, but boasts that the possibility of a marching band career is long gone. He recent dropped his  EP titled "BlindColors", which features four energy driven tracks. Get to know more about JamesCurtis and watch "Good Decisions".

The Toronto MCs A-Game are a rap group consisting of identical twins, Rommel and Robert Hinds-Grannum (known as Nova and Chase), who have experienced success on the Canadian charts with consecutive hits, rocked U.S. audiences and garnered fans across the globe. While these are tremendous feats, what’s awe-inspiring is that A-Game has accomplished them as an independent group. Get to know know more about A-Game and watch "One Call".

SB IV SHORT is, originally from Chicago but now resides in Atlanta. SB can be dsecribed as a mix between new age and old school hip hop with a clash of experimental. Fans refer his music as “Schizophrenic Rap” because it can be very chaotic, intriguing, & aggressive, but most of all lyrically constructed perfectly. His stage feel & lyrics have a very edgy & rugged feel. SB has released 4 free albums, and with “Mad Kind” being his most recent success. Get to know more about SB IV SHORT and watch "Holy Shit". 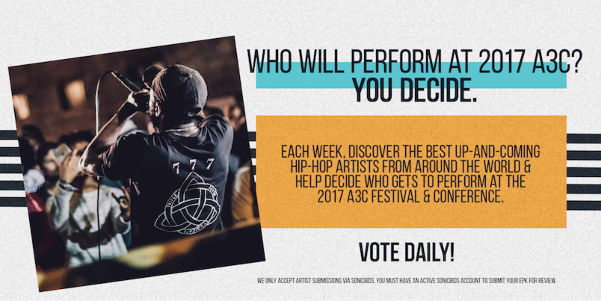 Topics: This Is My Year, Artist Advice, Opportunities