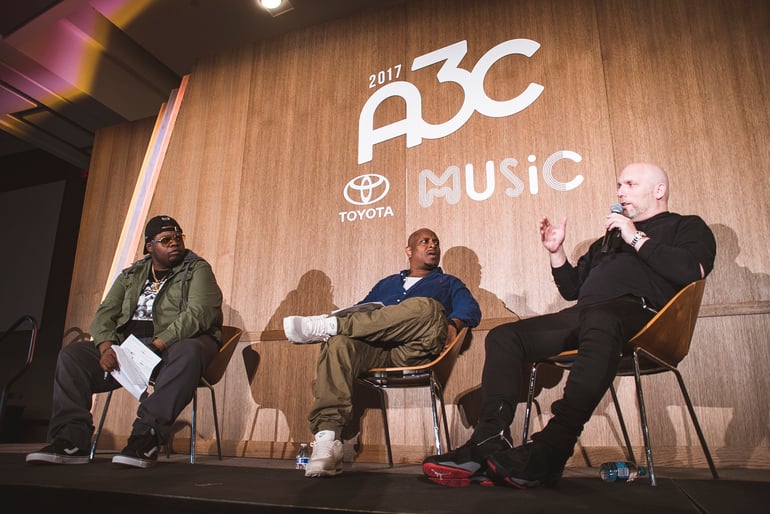 The first day of the 2017 A3C Festival & Conference was one to remember. Packed with seminars, panels and showcases, it was more than enough to satisfy any hip-hop enthusiast. One of the many highlights of the Conference’s opening day was the Combat Jack Show podcast.

Recorded live in the Toyota Music Ballroom at the Loudermilk Center, Combat Jack and A-King had an intimate conversation with the legendary Steve Rifkind. Rifkind is a music executive known for his uncanny knack for finding talent, and the innovative ways he marketed artists and their music during rap 's golden era.

On the Combat Jack Show, Steve spoke about today’s music industry, entrepreneurship and hip-hop culture. The most amazing part about Steve Rifkind’s legacy is that he’s literally evolved with the culture of hip-hop since its inception. His family’s music label, Spring Records, was responsible for releasing the first ever hip-hop record “King Tim III.” It was an inspirational story about a man who witnessed the birth of a culture, and its transition through different eras.

"There's no quick fix in hip-hop. You have to grind, wait and listen."  - Steve Rifkind

For most of the podcast, Combat Jack delved into Steve’s history in the music industry. From managing New Edition at 23 years old, to signing acts like the Wu-Tang Clan and Mobb Deep, Mr. Rifkind’s involvement with the hip-hop industry is second to none. The audience was astounded by his stories about moguls like Damon Dash and Puff Daddy when they were young and hungry, and some of the trials, tribulations and triumphs the came from dealing with some of hip-hop’s biggest artists.

For the past 25 years, founder and chairman of both Loud and SRC Records, Steve Rifkind, has established himself as one of the most successful and consistent executives in music. He, along with Russell Simmons, is also responsible with the creation of All Def Digital, a platform for emerging artists through YouTube promotion. To this day, Steve remains ahead of the curve when it comes to the music industry.

All in all, this episode of the Combat Jack Podcast was extremely educational and will remain a classic in the show’s archives.