Posted by Mike Walbert on Apr 10

Brands and hip-hop artists don't always get it right. A lot of partnerships and endorsement deals leave consumers and fans scratching their heads.  Monday Night Brewing and Nappy Roots releasing "Front Porch Pale Ale" is not one of those example.  This collaboration feels as natural a Robert Redford playing baseball for the New York Knights.

When we heard Monday Night Brewing (MNB) and Nappy Roots we're collaborating on a new craft beer, we wanted to get a little more info into this unique and very cool partnership. We recently spoke with Jonathan Baker (Marketing Guy and Master of Mind Control) at MNB and Blake German (DJ/Producer for Nappy Roots) to discuss the relationship.

In case you dont know...

MNB is an Atlanta-based craft brewery.  Monday Night Brewing grew out of a small Atlanta Bible study.  They started brewing beer together on Monday nights as a way to get to know each other better and spent almost 5 years perfecting their beers before bringing them to market.

Nappy Roots... well, they're hip-hop legends from Kentucky.  Best known for their many southern hits, they continue to release excellent music independently with the musical direction of producer 808 Blake of SMKA.

And now the interview...

How does Nappy Roots fit with the MNB brand?
Jonathan Baker: First and foremost, we get along really well with the Nappy Roots on a personal level. We are all about community, relationships, and having fun while working hard. Nappy Roots has a really genuine, approachable vibe that we also try to emulate. We don’t want to be that pretentious beer brand that isn’t relatable.

How does MNB fit with the Nappy Roots brand?
Blake German:  Well when you meet Jonathan, Peter, and Adam, there's a true since of friendship and camaraderie, and we in Nappy Roots have been friends and brother since college which is well over 20 years. There's just a true since of family at Monday Night and they care about there staff and everyone that works operates like a family, which exactly how our team runs. Work Hard, Play hard, love what you do!!!

What does MNB look for in partner?
Jonathan Baker: A partner, above all else, has to be someone who we’d actually want to hang out with. We need to trust each other and take each of our responsibilities seriously. A partnership only works if we’re in it together.

What does Nappy Roots  look for in a brand partnership?
Blake German: Well the thing about Nappy Roots is we're not the typical Rap group, as our brand reflects coming from humble beginnings, embracing our small town roots. So we try to find brands that speak to inclusion and represent everyday people. Which is why Monday Night Brewing made so much since because their backstory of trading in a 9-5 to start a business w/ a group of friends, and pursuing what you love is the basis of our group.

How did this partnership come together?
Blake German: Our good friend Robbie Hart from C4 linked us w/ Peter Kiley, who is the Master Brewer at Monday Night and (actually Robbie's old roommate). We basically went to their brewery at 10am and over a lot of beers and stories we began sharing our ideas about our New album, and our love of craft beers from traveling so much and it just was a perfect fit for both parties.

Being an Atlanta company, how important is the hip-hop community to MNB?
Jonathan Baker: Atlanta is the birthplace of so much creativity and collaboration. There are some really interesting parallels between hip-hop and craft beer – the relationships, the artistic expression – we actually have big speakers set up in the brewery and brew to hip hop the majority of the time. It fuels us. It’s built into us as Atlanta folk.

Did you work closely with Monday Night, or did you give them creative control of taste and look?
Blake German:  Well the coolest part of the partnership was Peter began to take elements from the New album and actually used them in the ingredients. The name if the beer is "Front Porch Pale Ale" which is after on of the songs on our new album "Another40Akerz". He decided that beer should be 40 IBU, which is reference to the 40 Akerz brand. and the golden yellow color of the beer is nod the album cover. It was those little details are what made it so much fun to work with Monday Night Brewing. We also actually helped in the cooking process like we spent a full day putting in hops and drain the sugars out. So you can literally Taste our efforts. 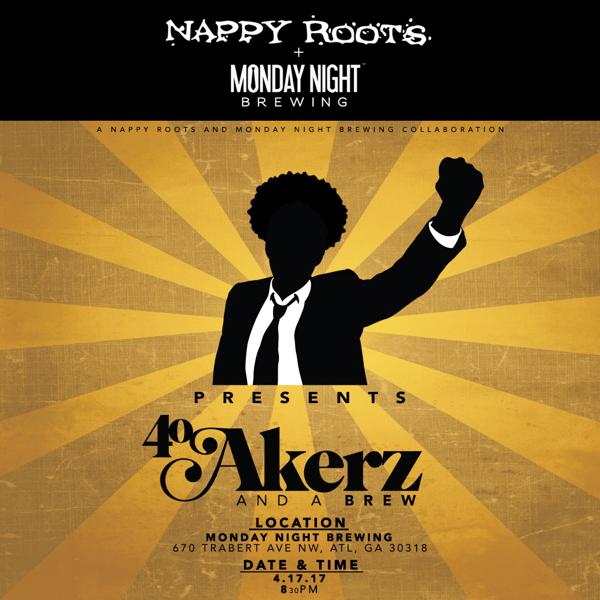