Meet the 5 Action Finalists pitching for $10,000 at A3C's Action Summit for Social Justice

Posted by Mike Walbert on Sep 11

The final pitch is on Friday, Oct 6th at the Action Summit

This is a free event with RSVP.

Congratulations to the 2017 Action Finalists 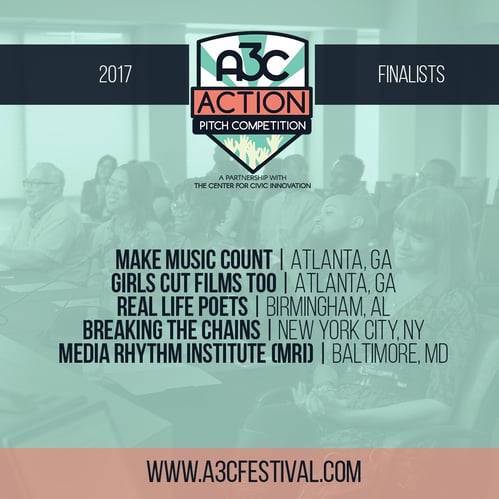 Thanks to Mail Chimp & ChooseATL for the support!

The mission of Make Music Count is to increase elementary and secondary students’ mathematical skill development through piano playing and reducing their math anxiety. By incorporating music into each lesson, students become engaged through music while simultaneously learning mathematical concepts. Each lesson is based on learning musical notes in a song. Each note is derived through a mathematical equation that varies from addition and subtraction to algebraic equations. Therefore, solving math equations leads directly to playing the piano, and a more positive attitude towards math.

“I'm most excited to meet and feed off of the energy from the other entrepreneurs at the A3C Action Summit. It's always refreshing to see others fighting the same battles to help out our community.” - Marcus Blackwell, Jr.

Girls Cut Film too is an initiative to train and equip teen girls with the skills needed to be competitive in the film production industry. The program is a Summer Film Institute for Girls that will expose them to various fields within the film industry such as: producer, director, script writer, camera operator and more! The goal of the program is to give our girls a realistic dream of fulfilling a career in an industry that has been under represented by females in the past.

“I am most excited about this idea that I have had for so long is now closer to becoming reality through A3C Action Summit!” - Ty Woods and Mohua Thakarta

We will implement the Teen Poetry Initiative within a minimum of two of the nineteen Birmingham Public library neighborhood branches and at Real Life Poets community arts hub in the East Lake community.  This allows direct access for middle and high school age youth in Birmingham City Schools, which is 95% African-American. Arts activist and teaching artist training will be facilitated at the Real Life Poets community arts hub which is directly situated in one of Birmingham’s most underserved communities.  The cycle of poverty, crime, and hopelessness that plagues many underserved communities in Birmingham is real and its consequences are often brutal and heartbreaking. We realize that, when compared to the impressive military-style hardware of police and tough-talking rhetoric of the political cycle, this program may look very small, but we will not give up on our city’s children. The effective moral imperative to offer a job-training, non-judging route for the city’s youth, and with that, hope for their future, does not have a shortcut.

“I am excited to meet other organizations and individuals from around the nation using Hip Hop culture to address social justice on all levels of this cultural revolution.” - John Paul Taylor

This project would be implemented in New York City at Rikers Island jail. Rikers is the second most populated jail in the nation, while demographically 16-21 year olds account for over 20 percent of its census. My past five years working with youth at Rikers as an art faciliator, youth counselor and Director of Programming for Friends of Island Academy has allowed me to tether relationships which will allow this project to be a success on the inside. The "Raise The Age" act which was recently passed states that all 16-17 year olds will be removed from Rikers by October 2018 but still leaves a great number of 18-21 year olds, some of whom are sentenced while the majority sit for years with open cases while awaiting an outcome. There is a huge amount of idle time during their incarceration which doesn't require meaningless programming but rather substantive interaction. Some of the most genius writers, poets, MCs, etc are incarcerated but lack outlets to express themselves while being refueled and supported by other artists. Creative mentorship and art advocacy not only allows space for expression but is also a springboard to guide young people into other needed discussions and decisions. This project will allow for youth within four facilities at Rikers to write around specific themes and be featured in monthly performances during their incarceration.

"I am excited to network with the other professionals who will be present and are utilizing their creative platforms to improve the conditions of their respective communities and also assist those who have chosen this path. This is an opportunity to learn and also strengthen the national ties to progressively evolve and expand outreach. I'm also excited that favorite Hip-Hop artist, Nas, will be headlining this year." - Messiah Ramkissoon

The goals and mission of Media Rhythm Institute to encourage, promote entrepreneurial thinking and empower youth to expand their knowledge of the media industry through research and hands-on documentary projects.  Our goal is to inspire young people to pursue a career in the media profession and also improve their quality of life by offering encouragement and exposure to positive opportunities to learn about their history, network with community leaders, and learn about the music, media industry and the many career paths that exist within it. Media Rhythm Institute also provides mentorship opportunities and peer consulting in an effort to provide youth with the tools, skills and support necessary as they matriculate through middle school, high school, college and on into adulthood.

"A3C is like a family reunion. This is a new family we're meeting on the community advocate side. We're excited about maximizing our network and scaling MRI up with other change agents." - Deverick Murray