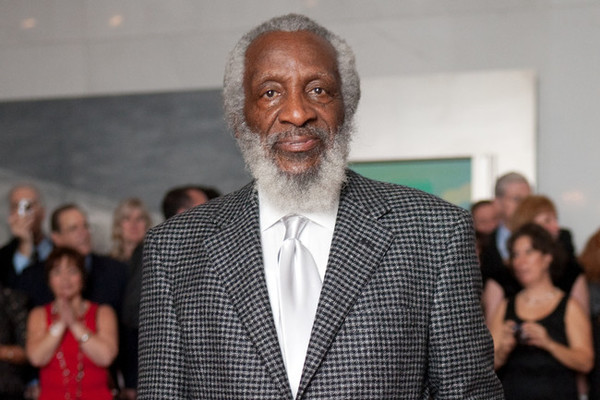 A strong proponent for civil rights and equality, Dick Gregory broke many barriers during the 1960s and became one of the first African-Americans allowed to perform in white nightclubs. During most of his career, he spoke on racial injustice and segregation during his comedy sets and was arrested several times for being involved in protests and rallies throughout the United States.

His son Christian Gregory confirmed his father’s passing on social media. “The family appreciates the outpouring of support and love, and respectfully asks for their privacy as they grieve during this very difficult time, more details will be released over the next few days," he wrote.

Following the news of his passing, members of the hip-hop community expressed their gratitude for Gregory's legendary contributions on social media. It's amazing to see how much of an impact he’s had on a multitude of generations. Take a look at what some of our favorites had to say about him below.

A great example of using your art for activism! Rest well brother! #dickgregory

My wife @shaybigga and I asked you when we 1st met u at an event @fahamupecou booked both us for to give us some marriage advice. Your advice "Turn the TV off and go outside hold hands and look at a tree". We still do it and it still works. This was the night I interviewed you and shay told you if you said the word "Bitch" again she wud push u down lol.... u asked her was she one and she said "No" and u responded "what u getting up set foe den"? Mannnnnnn we love you Ba Ba Gregory and our marriage is better for having known u. Thank U. Location #TheSWAGshop on Edgewood

RIP to the Great Dick Gregory 🙏🏽

RIP..... Always will be a listener of your words. #DickGregory

"In America, with all of its evils and faults, you can still reach through the forest and see the sun. But we don't know yet whether that sun is rising or setting for our country." -Dick Gregory #RIP

That time the legendary Dick Gregory came to my Birthday dinner to wish me blessings,strength,& lay some wisdom on me at the same time. Can't thank you enough King. RIP🙏🏽