Posted by Sierra Brown on Jul 7 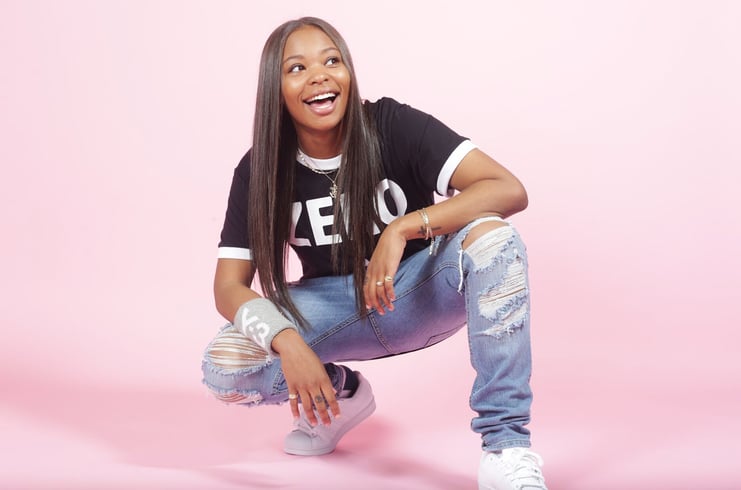 If you don’t know by now, Kodie Shane is a fairly new talent to keep an eye on. She’s a member (and the only female face) of Lil Yachty’s Sailing Team crew. When she released her debut mixtape 2060 on Soundcloud in early 2016, the Internet went crazy.

Now signed to Epic Records, her newest project “Zero Gravity” features some of her most popular songs, like “Sad” and “Drip on My Walk.” With her energetic aura, eclectic style and playful beats, it’s easy to understand why this up-and-coming Atlanta rapper has ferociously broke into the music scene. Kodie Shane is the fearless, self-confident teenager we all wish we were.

And ode to her undeniable likability, here are 10 of our favorite Kodie Shane Moments.

1. her impersonation of lil yatchy

During SXSW 2017, Steph Lecor sat down with Kodie Shane to talk about music, performing on stage, sneakers and more. The young rapper was asked to give her best Lil Yachty impression and she lowkey killed it. All she needed was the red braids.

2. Her response to her allegeded "switch-up"

In a string full of tweets earlier this month, Kodie Shane quickly dispelled any notion that she was changing up on people. It's a classic tale of progression, but she stayed humble.

IM NOT EVEN NOBODY

Why y'all being weird :(

3. Showing up to the red carpet dresssed like avril lavinge

In true Kodie Shane fashion, she showed up to the 2017 BET Awards Red Carpet inspired by the early 2000 pop-punk tomboy Avril Lavigne.

He was a skater boy she said see you later boy

4. turning up with the crew

Her energy is just freaking contagious. How many times have we seen this gif circle the Twittersphere? We've lost track.

If you really want to see her infectious personality in action, her vlog series "DonBaby Days" is everything. In this episode, her vidoegrapher Kevin Maya (@kevinmayaphoto) follows her and the crew around during SXSW.  At the very end, she lip syncs to Rihanna's "We Found Love" in a car full of dudes, the perfect display of her tomboy, girly charm.

Best friend goals. Seriously, the two have an unmatched sibling-like relationship. Although she's denounced rumors of dating Lil Yachty, ironically in the video for one of her biggest hits "Sad," he plays as both her tharapist and her love interest.

7. When she showed up to bet with captain crucnch and a sprite

Yes, she did it and we here for it. "Breakfast is the most important meal of the day," after all. V-103's Greg Street had a brief one-on-one with Kodie Shane and couldn't believe it. This one definitely takes the cake for now, but come October, our favorite Kodie Shane moment will be when she hits the A3C Stage with the rest of the Fools Gold Line-up!