ATL, stand up! ATL's own artists hit the stage on Fri, Oct 6th at Music Room

Posted by The Blog Team on Oct 1

Atlanta has become ground zero for talented hip-hop artists, and A3C has been breaking talent since 2005. ATL's Own presented by A3C & Schweinbeck is a showcase series for some of the most promising talent in Atlanta. From July - September we host a battle of the bands each month and 2 artists are picked each month to perform on the official ATL's Own stage.

These 6 artists have earned their spot on #A3C17 by winning over the crowd at the ATL's Own showcases series. 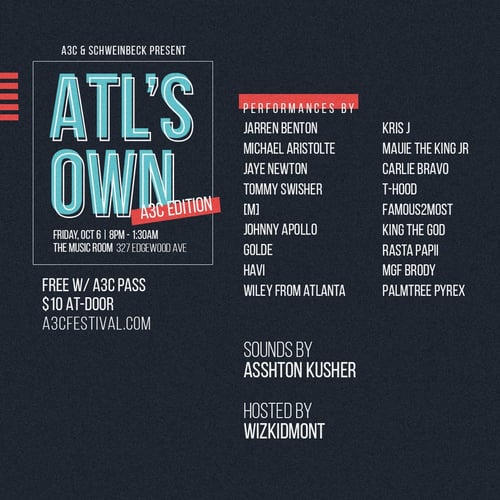 There are over 50 shows and events throughout the week featuring hundreds of artists, producers, and DJs from around the world. Explore the lineup and schedule.