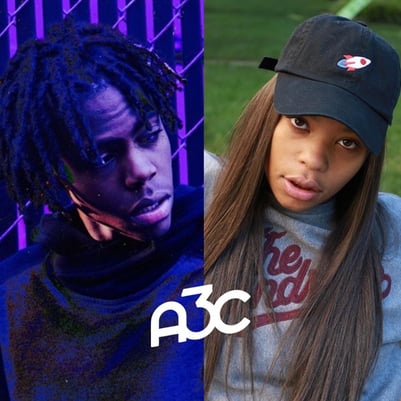 Kodie Shane - "Bounce Back" produced by Bradlea Roi
Kodie Shane, the 18 year-old who is breaking barriers for female artists in Atlanta. Kodie, who is a frequent collaborator and an official member of Lil Yachty's Sailing Team, has made waves this year with her debut EP Zero Gravity which was followed by Back From the Future EP in August. She has been profiled in The FADER's GenF as well as Pitchfork's Rising columns. Kodie will perform at this year's A3C Festival after coming off of 32 days on tour with Yachty and 23 dates with Lil Uzi Vert.
Yung Bans - "Ain't Know" produced by Soldado

18 year-old Atlanta artist Yung Bans, who is heavily influenced by the South Florida scene and often considered a key contributor to the sound, has made an impact with a slew of solo tracks and collaborations with artists including Smokepurpp, Lil Pump, XXXTentacion, Ski Mask The Slumpgod, Playboi Carti, UnoTheActivist, Yung Lean, and Wifisfuneral. Despite being on house arrest, Bans persevered, turning his home into a studio where he is currently putting the finishing touches on his forthcoming mixtape, Blood Thirsty.