Posted by The Blog Team on Mar 9

A3C LIVE is a new concert series featuring some of our favorite hip-hop artists at our favorite venues in ATL. This month we're proud to present ATL's Deante Hitchcock. 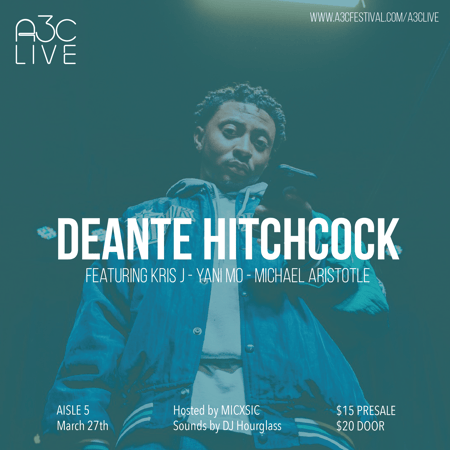 Our first A3C LIVE featured Childish Major and was SOLD OUT. Check out the recap video and photos. The Deante Hitchcock show is going to sell out too, so don't sleep.

Who is Deante Hitchcock?

Representing Riverdale, a small suburb of Atlanta, Deante' Hitchcock is a rapper who has demonstrated flexibility across his studio work, freestyle verses, and his unforgettable performances with a live band. Hitchcock's career began in 2012 when he released his debut mixtape, 19 Summers, as a teenager.
More recently, Hitchcock signed with the RCA-affiliated ByStorm label and reintroduced himself to the public with the release of the six-track EP So Much for Good Luck in October 2017. The project received critical acclaim and national attention.
Hitchcock is widely considered one of the best young lyricist in Atlanta, which has earned him the respect and admiration of his peers and industry elite.