Posted by The Blog Team on Jun 5

A3C has once again partnered with BeatStars to program a summit for producers at the A3C Conference in Atlanta from October 3-5, 2018. The BeatStars Summit enables producers and beatmakers to network with hip-hop’s most influential music industry professionals, experiment with the newest technology, collaborate with artists and create new music.

The BeatStars Summit will feature a conversation with some of BeatStars top revenue generating producers: CashMoneyAP, DreamLife, Kato on the Track, DG Beats, The Cratez and DJ Pain 1. Collectively the producers are projected to generate more than 1M via BeatStars this year. The conversation will focus on selling beats online, the rise of “type beats” and the future of music production.

A3C will be adding dozens of producers and hundreds of additional speakers over the next few months. 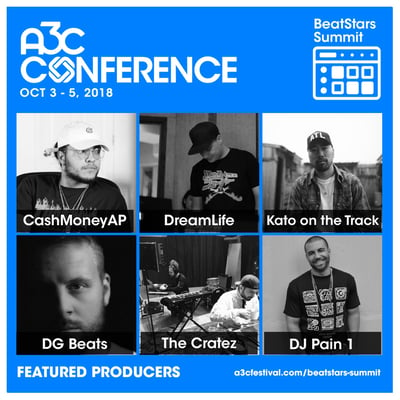 Beat Pitchs: Come ready to plug in and play your best beat(s) for a dope artist and their team. You'll have 2 minutes to impress, and will receive feedback on the spot.

Breaking Down the Beat: Several prominent producers will break down the making of several of their biggest hits. Learn how some of the biggest songs in hip-hop got created, and how they came to be.

Feedback Sessions: Each producer selected will play their beats in front of attendees and a panel of industry professionals. Each member of the panel will provide immediate feedback.

Speed Listening Sessions: Producers will sit across from Artists. Artists will play a song to give the Producer an idea of their sound. Producers then have 6 mins to play beats for the Artist. 90 min sessions will feature 6-10 Producers followed by 30 min of networking hopes of discuss collaborating and exchange information.

istandard's 'The Trakhouse': A dope experience for songwriters, producers, artists and music makers. On one day, from 5pm - 2am, istandard produces a series of interactive workshops, live interviews, gameshows, as well as the world famous istandard producer show, Beats & Bars, and the celebrity producer #plugplugpass.

A handful of producers will have the opportunity to collaborate in studio with some of the best producers in the game. Learn, network & possibly get your beats placed on their profiles or pitched for placements. Producers must purchase tickets to participate, as access is not included with an A3C pass.

... 2 more producers to be announced

BeatStars has disrupted the hip-hop world by enabling producers to become entrepreneurs empowering them to efficiently connect with artists and effectively license their beats. With over 700K users BeatStars estimates producers will receive more than $22M in revenue from the platform in 2018. BeatStars has recently been recognized for their impact in hip-hop music with featured stories in Forbes, Vulture, Billboard, Complex, VICE, Inc. and Genius.

Whether if you’re a recording artist looking for production to license or a producer looking for artists to collaborate with, BeatStars is the place it happens.